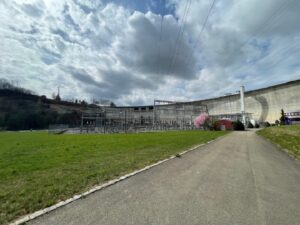 The Swiss energy company plans to set up the green hydrogen generation unit at its hydroelectric power plant at the Schieffenen Dam near Kleinbösingen, a municipality in the district of See, Fribourg.  It submitted a request for a construction permit in December and a preliminary project proposal to the local authorities last spring.

Groupe E will build the CHF 8 million ($8.6 million) hydrogen plant at the foot of the dam. It said the location is logistically ideal due to its proximity to the A12 and A1 motorways. The facility is set to produce around 300 tons of green hydrogen per year, which will be compressed and stored under pressure in 350 kg tanks for road transport.

H-Tec Systems, the hydrogen unit of German manufacturing and engineering company MAN Energy Solutions, will supply the facility’s two PEM electrolyzers.  “The two PEM electrolyzers will be supplied with more than 2 MW of green energy from a rotary turbine at the dam,” the supplier said.

Urs Kröpfli, a project manager for Groupe E, said the project will be “new territory” for the company.

“The constructive, open, and transparent communication with H-Tec Systems as well as their experience with their own efficient PEM electrolyzers gives us confidence in the upcoming implementation phase,” he said.

Group E and Engie Services AG, the Swiss unit of French energy giant Engie, jointly set up the Swiss H2 Generation venture in 2019.  The company specializes in the production of renewable hydrogen for the mobility sector.