Burns & McDonnell completes work on a 50 MW solar project for CenterPoint Energy, Fourth Wave to spin off its GeoSolar Tech unit, and Sunwealth secures financing for its LMI solar expansion. 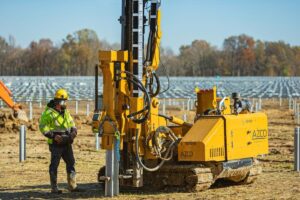 Maxeon Solar Technologies said it will supply around 1 GW of its bifacial Performance 5 UPP solar panels for the $1 billion Gemini solar plus storage power plant project approximately 33 miles northeast of Las Vegas, Nevada.  The project is being built and will be owned and operated by Primergy Solar.

The agreement calls for nearly 1.8 million modules to be supplied over a four-quarter period starting in the second quarter of 2022; project completion is planned by the end of 2023.

The Gemini Project is a 690 MWac solar photovoltaic plus a 380 MW/1,400 MWh battery energy storage project.

The Gemini project will be one of the largest operational solar power system in the U.S. when completed.  It is expected to provide a foundation to support the start-up and initial operation of Maxeon’s new Performance line module capacity for the U.S. solar power market.  Using large-format G12 mono-PERC solar cells manufactured in Malaysia, and module assembly in Mexicali, Mexico, this project is expected to take a significant portion of the expected output of Maxeon’s new capacity during the first year of operation.

Fourth Wave Energy said that GeoSolar Technologies filed a registration statement with the Securities and Exchange Commission in connection with the spin-off of GST from Fourth Wave. Following the spin-off, GST and Fourth Wave will be two separate and independent public companies.

As part of the spin-off agreement, GST received all commercial rights to the GeoSolar Plus technology and patents in exchange for the issuance of around one share of GST common stock for each outstanding common share of Fourth Wave.

The GeoSolar Plus system is designed to reduce energy consumption and associated greenhouse gas emissions in residences and commercial buildings. It is made up of a number of components including solar/PV and geothermal and is designed to produce more energy than it produces with no carbon.