Smart City Tech Is Being Built Into Planned Communities 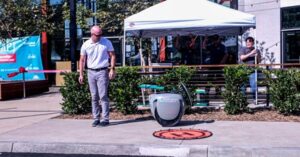 Robot carts and drone deliveries are just some of the baubles planned development communities are dangling as the sort of high-tech amenities residents are not only welcoming but expecting.

“Amenities isn’t just what we think of traditionally, in the vein of swimming pools, parks and playgrounds. It also includes technology,” said Caitlyn Lai-Valenti, residential senior director of sales and marketing at Brookfield Residential.  “It includes retail, and the walkability component for our residents as well.”

Brookfield is the developer behind New Haven, a master-planned community in Ontario, Calif., boasting hundreds of homes, along with retail and commercial space.  More than 350 homes in the community were sold in 2020 alone.

Some of the smart city technologies being made available to residents include drone delivery by DroneUp, ferrying goods from the New Haven Marketplace — a new retail area — to resident homes.  New Haven will also feature “robot carts” by gita, a self-operating enclosed cart about the size of a wheelbarrow, that can follow pedestrians with groceries or other items. Residents can also hop on a three-wheeled electric scooter by Clevr Scooters.

New Haven, which is part of the larger Ontario Ranch, was developed as a “gigabit community,” offering super high-speed broadband to support any number of smart city applications as well as the increasing work-from-anywhere trends following the COVID-19 pandemic.

The move to build in high-speed communications infrastructure is similar to other developments like National Landing, another planned community to be developed in the Washington, D.C., metro region.  National Landing is being developed in partnership with AT&T with 5G to support next-gen smart city technologies.

“To achieve the experiences of tomorrow, a strong, consistent, robust and secure network must be in place so that innovators know how their applications can interact today and how they can expand over time,” said Shiraz Hasan, vice president for AT&T Partner Exchange and Ecosystem Innovation.

National Landing is viewed “as a canvas for smart city innovation,” Hasan added.  “We believe a network like what we plan to deploy will improve experiences in everything we do with commercial business, government, retail, transportation and so on.”

“The opportunities could become endless in terms of expanding the experiences,” said Hasan.

Other planned development communities like Lake Nona in Orlando, Fla., are also partnering with urban technology companies to test and deploy systems to improve transportation and other aspects of living in the communities.  In addition to exploring technology related to traffic management, The Orlando Utilities Commission, Tavistock Lake Nona and Hitachi have jointly applied for a U.S. Department of Energy grant to explore energy load balancing at the building.

“So it’s not taking each of the individual energy sources and saying, how can you manage the load?  How can you balance the load between solar and photovoltaic and wind, and traditional? Yes that’s important,” said Dean Bushey, vice president for global social innovation business at Hitachi, in an interview with Government Technology in early June.

Homes in the New Haven community in California are all built with myTime and myCommand smart home services, which interface with smart home platforms from Amazon, Google or Apple.  The community also features ENE HUB (pronounced “any hub”), which are multi-functional streetlights equipped with USB charging ports, environmental sensors, Wi-Fi, wayfinding and more.

“So it really kind of provides a lot of different uses in the space,” said Lai-Valenti.

Brookfield includes an “innovation hub,” which is an internal team dedicated to researching and testing the various smart city technologies launched in the communities.

“We have a new technology group that’s always looking at all these different pieces,” said Lai-Valenti.

Developers behind the National Landing project in Washington see the community as a form of “living lab” where urban technologies can be tested and deployed and is “part of our evolving strategy to truly enable the use cases of tomorrow,” said Hasan.