Climate Pledge Arena is the first ever zero-carbon arena in the world.  This iconic project boasts numerous green innovations with a zero-carbon footprint, solar power creating 100% renewable energy, and recycled rainwater in a “rain-to-rink” system.  This system collects rainwater to create the only NHL arena to have 100% recycled water on its rink. 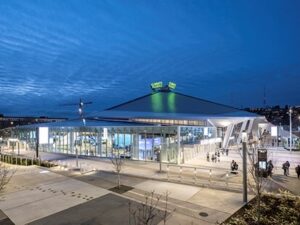 One of the key challenges of this project was that it was a complete rebuild except for the preservation of the arena’s historic roof.  The construction project team had the monumental task of building the entire arena from the inside out, without the use of multiple tower cranes.  Firstline Systems, along with its distribution and supply partners, successfully stocked over 1.86 million pounds of cold-form metal framing (CFMF) and over 1.5 million square feet of drywall products into the multi levels of the arena without the use of tower cranes.  The team developed and fabricated over 70 aluminum material carts, each with removable A-frames for versatility, allowing each cart the capability of handling CFMF or drywall, to keep their “everything on wheels” approach a success.

Climate Pledge Arena showcases one of the largest displays of LED boards of any arena in the U.S. Firstline Systems designed and constructed all support systems for the LED boards, including a unique 200-by-25-foot living wall that combines plant life with LED graphics, a sprinkler system inside the wall, and gutter system at the floor line for drainage, as well as multiple soffit and ceiling LED displays.

The Firstline team was also faced with implementing building information modeling on its portion of the project.  This was a significant challenge as the project took on approximately 50 phases of both primary and secondary framing, necessary to follow the concrete pours of the chevrons that supported the entire roof structure.  The completion of BIM in a phased application was vital to the accuracy of the layout and for the scheduling of all trades that followed within hours of the framing installation.  Firstline Systems partnered with Sanrachna for all the CFMF BIM requirements on the entire project.

The arena is equipped with numerous slab elevator shafts that extend up to 91 feet.  The Firstline team engineered and constructed these shafts with CFMF support systems to stay within the max span tables for two-hour rated shaft wall systems.  This system eliminated the need for additional steel framing inside each shaft as well as the additional fireproofing of those members, resulting in significant project savings.

Firstline Systems was at the front of the project with its safety program and, along with Mortenson Construction, continued to build during the pandemic through constant communication, transparency, and flexibility to maintain work crews and production.  The teams successfully met the schedule for the arena to open for the 2021/2022 Seattle Kraken season.