Zinc8 to manufacture its first zinc-air batteries in the U.S. 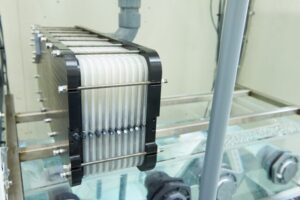 Zinc8 Energy Solutions Inc. announced that the company’s inaugural commercial production facility will be based in Ulster County in New York. Based upon comprehensive analysis done by the company, the recently announced Inflation Reduction Act (IRA) manufacturing production credits provide distinct and direct benefits to Zinc8, influencing its production plans in the United States.

Zinc8 Energy Solutions has developed a proprietary flow battery technology that it claims is able to deliver power in the range from 20 kW to 50 MW that can store and discharge energy durations from 4 to 100 hours. Scalability and higher capacity is achieved with an increase in the size of storage tanks that hold zinc particles. The modular battery can be configured to support a wide array of long-duration applications for microgrids and utilities, as well as for commercial and industrial projects.

Unlike lithium-ion technology, which requires new stacks to scale, Zinc8 says it has completely decoupled the linkage between energy and power. This means that scaling Zinc8’s technology can be accomplished by simply increasing the size of the fuel tank and quantity of recharged zinc fuel.  According to the manufacturer, the technology promises zero capacity fade over an extensive lifetime, and the batteries are non-flammable, non-toxic and sustainable with stable supply chains for mass production.

The Canadian company was enticed to move to the USA as a result of the Advanced Manufacturing Tax Credit included in the IRA, which provides incentives to battery manufacturers as well as to critical mineral processing companies. Every eligible battery cell will receive a $35 credit, scaling with the capacity of the battery, with incentives to last at their initial level until 2029, before phasing down from 2030 to a phase out stage beginning in 2032. There is also $10 billion support available for construction of clean energy tech factories, or for retrofitting existing factories with tools and production lines to make clean energy equipment and components.

“This represents some direct and beneficial credit opportunities for Zinc8,” adds MacDonald. “It is abundantly clear that with the introduction of the IRA, US policymakers, led by Senator Schumer, are taking real action by introducing incentives that benefit both the climate and the economy. We have received tremendous support both at the federal and state level as we continue to analyze possible sites for our first manufacturing facility.”

Zinc8 signed a letter of intent to move into iPark87, which is the former TechCity campus now being redeveloped as an EPA cleanup site.

Zinc8 announced that it would be installing its technology at a New York City housing complex in a trial run by the New York State Energy Research and Development Agency (NYSERDA). The plan is for a 100kW/1.5MWh zinc-air energy storage system (ZESS) to be installed at Fresh Meadows Community Apartments in Queens, New York, to support and enhance the economics of a Combined Heat and Power (CHP) system currently under construction, along with an existing photovoltaic system.